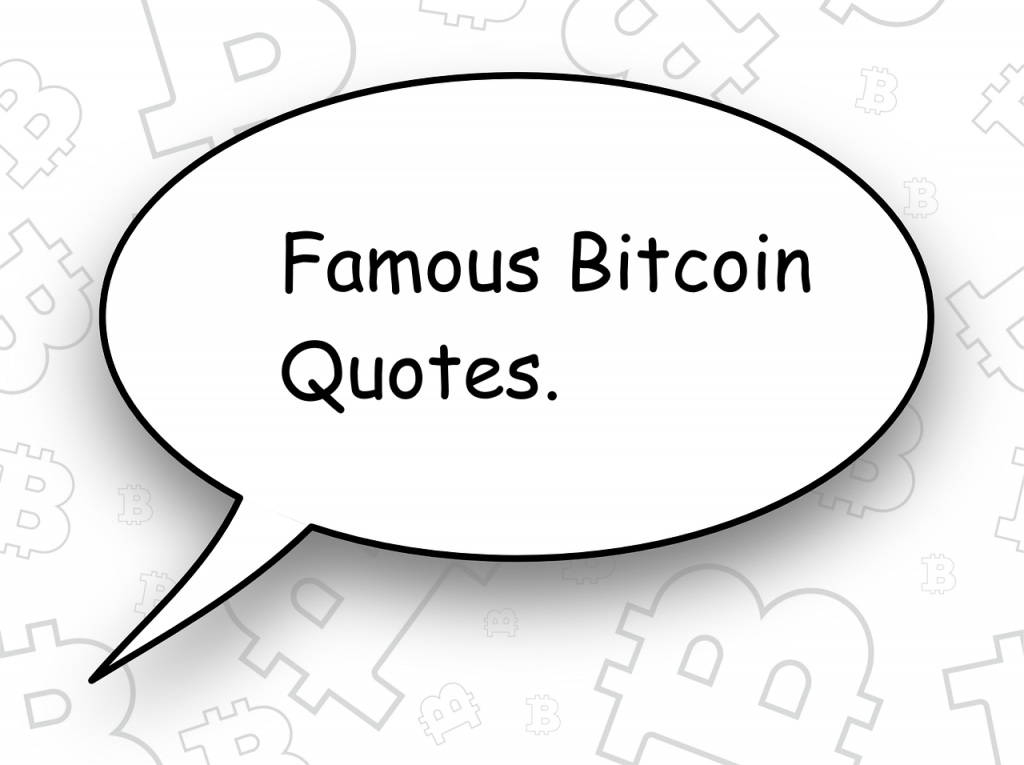 Cryptocurrencies have garnered widespread attention since the price of Bitcoin shot up in a short space of time; creating instant millionaires. This attention has been both negative and positive, with some calling it the “fourth industrial revolution” while others are calling it a “bubble”, likening Bitcoin to “rat poison”.

Cryptocurrency prices are influenced by many factors including speculation, regulation, adoption, security concerns due to hacking, new forks, coin upgrades, and spreading of FUD (Fear, Uncertainty and Doubt) by the media and prominent media/business personalities.

In this post, we look at popular cryptocurrency, Bitcoin and blockchain quote from influential leaders in the blockchain, business and technology industries. Some of these quotes were optimistic, whereas others were negative – predicting a terrible end for cryptocurrencies.

What cryptocurrency supporters have to say about blockchain and Bitcoin

“Blockchain technology could change our world more than people imagine,” “Bitcoin however could be a bubble.” – Jack Ma (Chinese Investor, Philanthropist and Co-Founder of Alibaba)

“Bitcoin is a remarkable cryptographic achievement and the ability to create something that is not duplicable in the digital world has enormous value.” – Eric Schmidt (CEO of Google)

“There are three eras of currency: Commodity based, politically based, and now, math based.” – Chris Dixon

“I think the fact that within the Bitcoin universe an algorithm replaces the functions of the government is actually pretty cool. I am a big fan of Bitcoin.” – Al Gore

“Well, I think it is working. There may be other currencies like it that may be even better. But in the meantime, there’s a big industry around Bitcoin. — People have made fortunes off Bitcoin, some have lost money. It is volatile, but people make money off of volatility too.” – Richard Branson

“PayPal had these goals of creating a new currency. We failed at that, and we just created a new payment system. I think Bitcoin has succeeded on the level of a new currency.” – Peter Thiel (Venture Capitalist and Founder of PayPal)

“There will be at most 21 million Bitcoins in existence. There isn’t even enough BTC to go around for EVERY millionaire to own one. So before you buy any other coin (LTC included), try to own at least 1 BTC first.” – Charlie Lee (Founder of Litecoin)

“one of the most powerful use cases of blockchain technology was to inscribe immutable and transparent information that could never be wiped from the face of digital history and that was free for all to see. Satoshi’s choice first to employ this functionality by inscribing a note about bank bailouts made it clear he was keen on never letting us forget the failings of the 2008 financial crisis.” – Chris Burniske (Author of Cryptoassets)

“Bitcoin has a couple of things going for it: one is that it is distributed, with no single point of failure, no ‘mint’, no company with offices that can be subpoenaed and arrested and shut down.” – Hal Finney

“Just as it got easier to use email, it will be easier to use Bitcoin as people invest in it and become more familiar with it.” – Gavin Andresen (Core Developer of Bitcoin)

“I think of Bitcoin as a remarkable social phenomenon,” “It’s an epidemic of enthusiasm … it is a speculative bubble. That doesn’t mean that it will go to zero. Speculative bubbles recur. We had a bubble in Bitcoin in 2013, and it looked like it was done — it fell from 1,000 to 200 — but now look, it comes back.” – Robert Shiller (Nobel prize-winning Professor of Economics at Yale University)

What the critics have to say about Bitcoin, blockchain and cryptocurrencies

“You can’t value Bitcoin because it’s not a value-producing asset.” – Warren Buffett

“[Bitcoin] itself is creating nothing. When you’re buying nonproductive assets, all you’re counting on is the next person is going to pay you more because they’re even more excited about another next person coming along.” – Warren Buffett

“I can say almost with certainty that cryptocurrencies will come to a bad end,” – Warren Buffett

“Bitcoin is successful only because of its potential for circumvention, lack of oversight.”

“So it seems to me it ought to be outlawed,” “It doesn’t serve any socially useful function.”

“It’s a bubble that’s going to give a lot of people a lot of exciting times as it rides up and then goes down,” – Joseph Stiglitz (Nobel prize-winning Economist)

“The currency isn’t going to work. You can’t have a business where people can invent a currency out of thin air and think that people who are buying it are really smart.” – Jamie Dimon (JP Morgan Chase & Co)

“avoid Bitcoin like the plague,” “There is nothing to support Bitcoin except the hope that you will sell it to someone for more than you paid for it.” – Jack Bogle (Vanguard Founder and father of The Index Fund)

These quotes may give you some ease or make you more cautious. But, advice from people who are not blockchain experts should always be taken with a pinch of salt. Very often, people may have ulterior motives – it is not uncommon in the cryptocurrency industry for prominent business people to first bash the idea of cryptocurrency, before making a complete 180-degree turn a few months later.

It’s important to also note that many cryptocurrency critics who stem from the banking or traditional finance sectors may see cryptocurrencies as a threat to the established systems.

The point is that if someone is famous or influential, it does not mean that what they say is the ultimate truth – it is simply an opinion based on a personal experience. Always do your own research, read up on the actual cryptocurrency use-cases and technology behind each cryptocurrency you choose to invest in. Finally, gather information from as many sources as possible to get a non-biased, objective view of blockchain technology and cryptocurrencies before reaching a final conclusion.