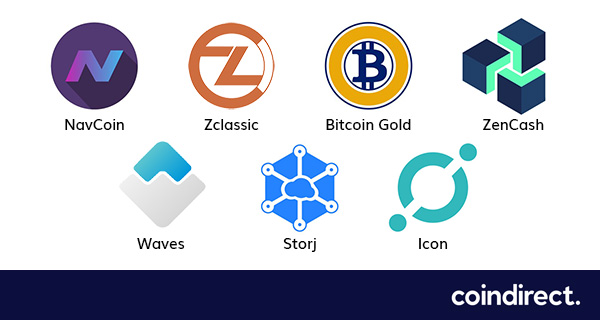 We break down what makes these new altcoins different

After a competitive poll last month, we’ve decided to add the top performing altcoins to the growing Coindirect marketplace. For this round, the top 7 coins included Nav, ZenCash, Bitcoin Gold, Icon, Storj, Zclassic and Waves were chosen. You may not be familiar with some of these cryptocurrencies, or any of them, and that’s okay. We’re going to give you a brief introduction to what they are, where they came from and where they might be going. Remember to keep an eye on our Twitter account to have your say on which coins get added next.

This hard fork of Bitcoin took place on October 24, 2017, and has sustained positive public interest ever since. It aims to ‘make Bitcoin decentralised again’ and is achieving this by adopting a Proof of Work algorithm called Equihash. Their other focus includes fair distribution, replay protection and transparency with their free open source software project.

The Icon foundation launched their Ether based ICO in October 2017 quickly worked it’s way up to position 25 on Coin Market Cap. Based in South Korea, their advisors include Canadian business executive Don Tapscott and American Crowdfunding organiser Jason Best. Icon wants to provide a platform that brings together financial, security, insurance, healthcare, education and commerce industries. Pretty ambitious right? They plan to use their loopchain technology to allow various blockchains to interact with each other via smart contracts.

This open-source coin describes itself as ‘An easy to use decentralised cryptocurrency’ and has been around since 2014. Their focus has been on emphasising the coin’s design, usability and experience as it offers fast, private transactions. They have block confirmations every thirty seconds which beats private coin competitors Monero, Zcash and Dash for speed.

The Waves Platform launched their decentralised network in November 2016, allowing developers to build their own blockchain-based applications with smart contracts. The WAVES token has a fixed circulating supply of 100,000,000 and is used for all operations on the Waves network. In July 2017, the platform announced a partnership with Deloitte as their way to create a clear framework for businesses to operate within.

This coin launched in May 2017 as a fork of Zclassic, which was a fork of the original Zcash. The coin has a strong focus on research & development, and looks to solve the scalability issues within the cryptocurrency space. Its overall goal is to be the most useful privacy cryptocurrency on the market by being a secure platform for money, messages & media. They have a fixed lifetime coin amount of 21 million ZEN and utilise the same Equihash Proof of Work algorithm as Bitcoin Gold.

Storj (pronounced Storage) uses the Ethereum system to operate a decentralized cloud storage platform where anyone can sell their extra hard drive space for STORJ tokens. This innovative platform had their beta launch back in April 2016 and has the potential to disrupt the major players currently dominating the cold storage space. The shared cloud network boasts security, no downtime, and high speed for accessing your data.

Zclassic forked from Zcash in November 2016 to promise no founders tax, no slow start while keeping the same trusted parameters. The coin uses the same source code as Zcash but differentiates itself by offering financial anonymity that’s fair and impartial. The more recently released Bitcoin Private (BTCP) took elements from Zclassic by incorporating its zk-SNARKs feature for added privacy, as well as Zclassic’s Equihash algorithm.

To buy any of these newly added coins, simply visit our site and place an order.