A globally decentralised cryptocurrency based on blockchain technology

Litecoin, otherwise known by its ticker ‘LTC’, was brought into the world of cryptocurrency via an open-source client on GitHub by an ex-Google employee, Charlie Lee.

At the time, Charlie Lee’s main objective for the digital currency was to develop a lighter version of Bitcoin. That means cheaper, faster transactions with a secure LTC network for everyday use.

Since its release on the 13th of October 2011, the silver to Bitcoin has dropped by a few ranks on the coin market cap. However, still remains among the top 10 digital currencies on the cryptocurrency market price charts. Despite Litecoin holding the 7th position on the coin market capitalisation, there are many integrated benefits which set the cryptocurrency apart from its overhead coins.

What is Litecoin LTC?

Litecoin is built on a peer-to-peer network and enables instant transactions to anyone around the world at nearly 0% fees. It is essentially an open-source, decentralised payment network that empowers users to take control of their fiat finances. This also means that LTC buyers and sellers can buy, sell, send and receive funds directly to buyers, sellers, senders and receivers without the control of middleman.

The coin’s leading feature includes fast transaction confirmation times with an efficiency for additional storage. As an open-source digital asset, Litecoin uses the industry’s blockchain to store transaction on a public ledger

The Litecoin cryptocurrency project was initially released under the MIT/X11 license. With this, the developer of the open source software has the authority to function the software and distribute modified copies of it. When upon release, the process allows for independent verification of binaries and the source code attached to it.

In comparison to its counterpart – Bitcoin – Litecoin’s blockchain is powerful enough to produce a much high transaction volume thanks to its ability to generate recurrent blocks. Of course, this scales Bitcoin’s slow transaction times, as LTC buyers and sellers receive near-instant transaction times.

So, what makes Litecoin different from its gold alternative, Bitcoin?

The main disparities between Litecoin and Bitcoin are speed and volume: 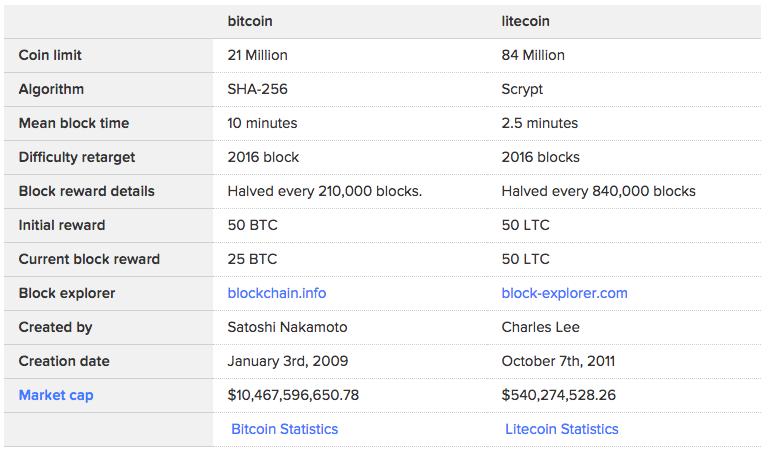 The supply and demand of LTC

While Bitcoin only has a total of 21-million coins out in the world, Litecoin has 84-million. But, why the limited supply of coins? The answer is simply, ‘supply and demand’. If there was an unlimited supply of LTC coins, would there be a demand for it? If there was no demand, would LTC prices fluctuate so that we can make a profit on it?

A great example is Litecoin mining. When mining Litecoin, LTC miners are awarded 25 new LTC coins per block. This supply amount gets halved every 4-years, which is every 840,000 blocks.

The cryptocurrency market is constantly running a bull marathon. LTC prices are generally impacted by Bitcoin’s gains and woes. For example, should BTC fail, LTC prices could rally to new highs as investors try to make up their lost BTC funds by buying or trading Litecoin on cryptocurrency exchanges.

Litecoin has also exhibited much promise for the future as new merchants, vendors and blockchain applications are always introducing Litecoin’s fast payment processors – an economic advantage which Bitcoin is short of. Of course, this is causing a rising boost in LTC prices.

Many Litecoin investors continue to hodl due to lack of banking integration and credit card penetration, and high cross-border transaction fees brought by remittance charges. LTC holders, buyers, sellers and traders can now make a profit from their digital assets. Coindirect has scaled these problems with a fresh solution to help users generate profit for their Litecoin.