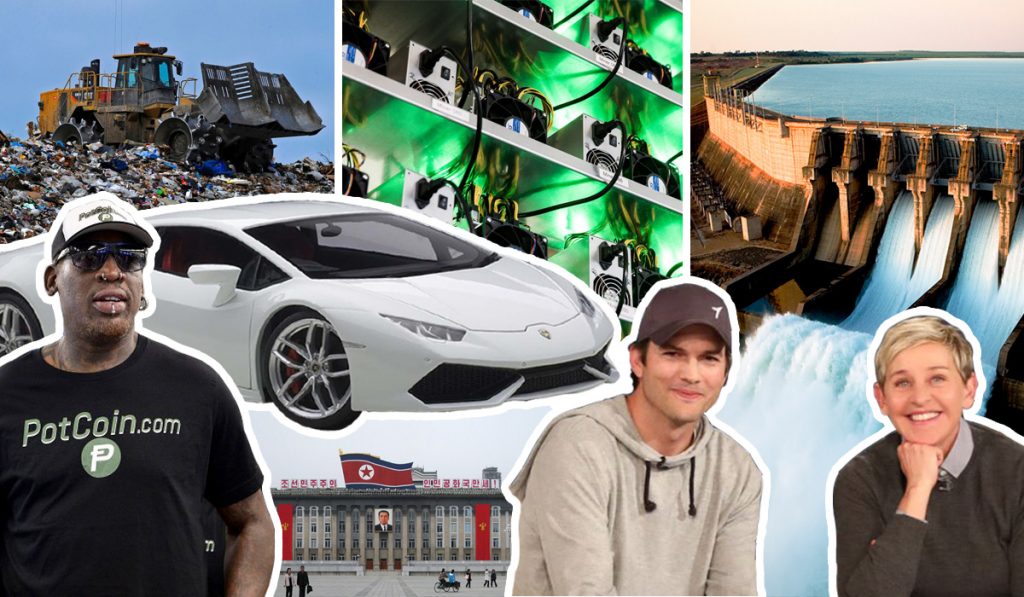 For a growing industry that seems to head in every conceivable direction at once, it’s no surprise that bitcoin and other cryptocurrencies have made some interesting connections along the way.

From playing a dumb teenager in That 70’s Show to a seasoned Crypto investor. Ashton Kutcher’s investments in Ripple and Bitpay have seemed to pay off. The guy who played Steve Jobs in the biopic ‘Jobs’ has now transitioned into a real-life respected tech investor. He’s even managed to use his star power to bring some mainstream attention to crypto when he made a high profile appearance on Ellen to make a donation towards her wildlife fund.

A British man is now looking to dig up an old hard drive he had thrown away years earlier after realising his Bitcoin private keys were still inside it. He has located the landfill where they might be, but digging up his computer amongst the tons of garbage presents a greater challenge. The amount he claims to have ‘temporarily misplaced’ amounts to 7,500 bitcoins. In his defence, that didn’t translate to much back in 2009, but he understandably hasn’t lost hope in finding it again.

You wouldn’t think the worlds of basketball, cryptocurrency, North Korea and marijuana would cross paths very often. Or so you would think… If we were to draw a venn diagram of all these seemingly disconnected things, you’d find none other than Dennis Rodman in the middle. The retired basketball legend struck up a bizarre relationship with the North Korean leader over a love of basketball. The only way for the story to get weirder is if

Talk of ‘When Lambo’ is not uncommon in cryptocurrency forums, but it is normally reserved as a hypothetical. The car is seen by many as a symbol of both excessive wealth due to its price tag and flamboyant design. When the price surge of late 2017 made buying a Lambo a reality for some, unsurprisingly, someone had to do it. Lamborghini has seen record sales so, from a humble $117 worth of bitcoin in 2011, Peter Saddington cashed out in style with a white Lamborghini Huracan. This story sure makes the infamous 10,000 bitcoin pizza order from 2010 look a little silly.

Between the processing power required and the cooling costs, it’s well known that mining Bitcoin uses a significant amount of energy to verify blocks on the chain. The solution has come in the form of combining cold climates with cheap natural power sources like hydroelectricity. This is where Canadian firm Hydro Quebec comes in. They host 30 large cryptocurrency miners on their network, which boasts the cheapest per kilowatt of electricity in the whole of North America. As long as there are water and gravity, Quebec will remain an attractive place to set up shop for crypto mining.

You can read our first instalment for more Quirky crypto related stories here.