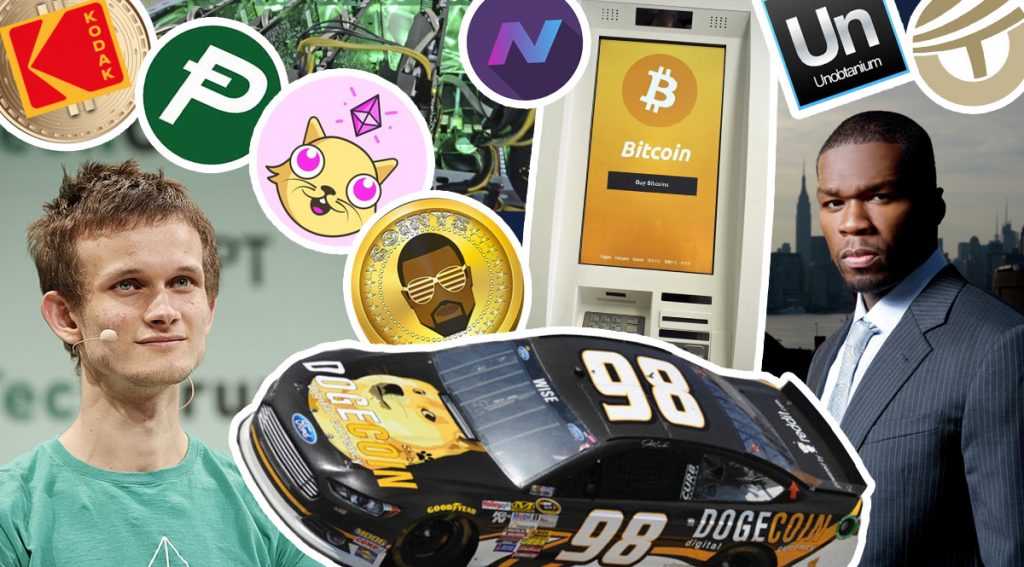 In a relatively short period of time, Bitcoin and the wave of new cryptocurrencies that followed has transformed the way people see money and transacting. The rapid innovation within the industry has created space for many experiments, opportunities and some pretty bizarre stories. We’ve picked 7 stories from the fascinating world of cryptocurrency.

In a fitting manner to the decentralised nature of Bitcoin, the founder remains a complete mystery. Its creation is credited to a Satoshi Nakamoto, which could be represented by a person or group of people, not necessarily of Asian descent. Just because the creator has shied away from publicly claiming the glory of their invention doesn’t mean they haven’t benefited from its success. ‘Satoshi’ owns one of the largest Bitcoin balances currently sitting on the distributed ledger.

One of the innovations that jolted Bitcoin out of the web and into mainstream culture was the arrival of the Bitcoin ATM. These internet-connected kiosks work in a similar way to a traditional ATM but instead conduct cash for bitcoin transactions. The first versions of these ‘machines’ showed up in Canada in 2013, and there are now close to 2500 Bitcoin ATM’s in 64 countries around the world. Their appeal has been limited based on their lack of compliance standards, high transaction fees and exorbitant exchange rate charges. Unless they become more competitive, they will most likely remain a novelty.

Born out of a meme, and initially launched to ridicule how frivolous cryptocurrencies can be, Dogecoin has pivoted to a community of do-gooders. Their achievements include helping to fund the Jamaican bobsled team get to the 2014 Winter Olympics in Sochi, Russia. Making it their first appearance since their 1988 debut. They have also crusaded for clean drinking water in Kenya and sponsored a Nascar driver.

Vitalik Buterin, the co-founder of the cryptocurrency Ethereum, was only born in 1994. The Canadian/Russian programmer wrote the white paper for Ethereum back in 2013, before he was even allowed to vote. Since then he has also co-founded Bitcoin Magazine, contributed towards other open source software projects and made it into the prestigious Forbes 30 under 30 list for 2018 at the current age of 24.

One of the benefits of having a decentralised technology like blockchain is that anyone can start their own coin without needing a big investment or much technical know-how. There’s even a dedicated website to help people launch their own coin in a matter of hours. With well over 1,500 different digital currencies available and counting, it’s clear that there is plenty of healthy competition out there. The mixture of coins cover everything from innovative new technologies and ICO’s, to the novelty and niche coins. Here is a brief taste of some of the ‘wildcards’ out there:

Unoptanium: It looks to be the scarcest altcoin as only 250,000 coins will be mined over the next 300 years.

Useless Ethereum Token: A token that the creators are actively discouraging you to buy, yet people have still bought…

The American gangster rapper had accumulated 700 bitcoin from the sales of his album Animal Ambition back in 2014. What started as an innovative sales gimmick turned into a genius investment opportunity. To give context, 1 Bitcoin was valued at less than $700 for most of 2014. This initially placed 50 Cent (real name Curtis Jackson) as an unlikely Bitcoin millionaire in 2017, with him claiming he had ‘forgot’ about his bitcoin wallet. After this news seemed to contradict his bankruptcy claims of 2015, he was quick to claim he had already converted them back to dollars soon after.

Due to the high electricity costs of mining and the need for cool environments for the computer rigs, Cryptocurrency mines have popped up in some pretty interesting places. Even though much of the crypto technology is developed in major cities, the mining that makes blockchain technology possible happens in some unlikely places. The major hubs include Canada, Russia, China, but some surprising beneficiaries of the crypto mining boom include Sweden, Iceland, Serbia, Georgia, the Czech Republic and even Tibet.

An online game based around collecting and breeding rare digital kittens has put a serious strain on the whole Ethereum network. The game is built on top of Ethereum and each transaction within the game is run through the network. Due to the wild popularity of the game, Cryptokitties has been clogging up the network with unconfirmed transactions which is wrecking havoc behind the scenes.