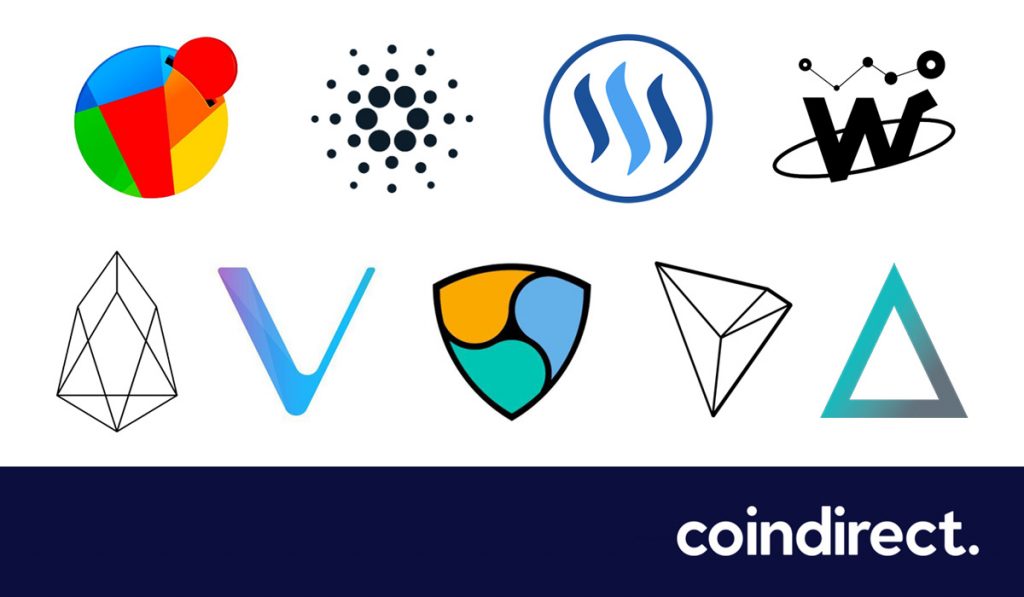 As the cryptocurrency landscape continues to expand, some altcoins are rising closer to the top by going in bold, creative new directions. The industry is currently experiencing an innovation boom, from building global business ecosystems, to blockchain-backed lending platforms. Each new coin that is introduced serves a unique purpose, with ICO’s funding new business ventures and others given as rewards for creating valuable content.

Now is a good time to introduce yourself to the 9 new additions to the Coindirect.com marketplace.

This coin has quickly become relevant in a crowded market after its initial release on the 29th of September 2017. It was developed by Charles Hoskinson, one of the co-founders of Bitshares and the Ethereum project. The coin takes the smart contract concept from Ethereum, but seeks to deliver even more advanced features than any other protocol already out there. Cardano will be capable of running financial applications, smart contracts, and decentralized applications. They plan to achieve this with a core team of global experts who’ll continue to evolve the blockchain platform with a research-first driven approach.

The Initial Coin Offering (ICO) for EOS launched on 26th of June 2017 and is headed up by Dan Larimer, the founder of two other established crypto coins, STEEM and Bitshares. The company behind the coin is called Block.one and its registered in the Cayman Islands. This new blockchain operating system is based off Ethereum but looks to be faster and more scalable solution, allowing users to build decentralized applications more efficiently. Block.one wants EOS to be used by large businesses, enabling corporations to automate processes, monitor assets, and create multiple applications.

NEM launched on March 31, 2015 by a Bitcoin Talk Forum user under the name of UtopianFuture. Unlike many other blockchain technologies, NEM was built from scratch with strong modular customization capabilities for almost any application. NEM is known for introducing new features to blockchain technology such as its proof-of-importance (POI) algorithm, multisignature accounts and encrypted messaging.

This coin only launched last year but has gained plenty of attention from its ambitiously minded founder, Justin Sun. He was named one of the Forbes 30 under 30 years for Asia in 2015 and previously worked at Ripple, but left to launch TRON from his Beijing office. The coin aims to be a decentralized content sharing platform, giving the power to the creators and consumers within the massive digital entertainment industry. The protocol enables content creators by introducing a new way to release, circulate and deal with digital assets, thus forming a decentralized content entertainment ecosystem.

Launched in August 2017, Vechain claims to be the world’s leading blockchain platform for products and information. With offices already set up in France, Singapore and Hong Kong, VeChain specialises in distributed data storage, third party services and application programming interface (API) gateway services. Their technology has already been successfully implemented globally across various industries such as luxury goods, liquor and agriculture.

Steem is a coin linked to Steemit, a rewards platform based in New York City, and founded by Ned Scott and Dan Larimer, creator of EOS, and Bitshares. It was created as an innovative way for publishers to monetize their original content and grow a community with help from Smart Media Tokens (SMT). This is not just a theory, the platform has already rewarded over 22 million USD worth of Steem since launching in June 2016. The social platform has attracted over 330,000 user accounts so far with authors receiving Steem (STEEM) tokens based off the amount of upvotes their posts receive.

Founded by the established South Korean businessman Xu Fangcheng, Walton looks to combine the technologies behind Internet of things (IoT) with powerful blockchain systems. The name is a tribute to the scientist Charles Walton, and doubles as an acronym for Wisdom Alters Label Trade Organization and Network. Their aim is to create smart business ecosystems based on blockchain, IoT (Internet of things) and the application of Radio-Frequency Identification (RFID) technologies.

Created by serial entrepreneur Shaun Owen, SALT, or Secured Automated Lending Technology, lets users leverage their blockchain assets to secure cash loans. The Denver-based lending company gained attention from the industry by allowing borrowers access to capital backed by the value of their cryptocurrency wallets, instead of traditional credit checks. This disruptive model could shake up the industry by acknowledging the value of blockchain assets which are currently being neglected by traditional financial institutions. The SALT coin itself is tethered to Ethereum ERC20 smart contracts.

Originally launched in early 2014 by a global community of developers, Reddcoin has steadily raised its profile as ‘The Social Currency’. Their mission is to make digital currency easy for the general public by integrating their platform seamlessly with all major social networks. Reddcoin uses a Proof of Stake Velocity algorithm that encourages both ownership (Stake) and activity (Velocity) in order to do away with wasteful consumption of electricity for mining.

Disclaimer: This article should not be taken as financial advice. Never invest what you can’t afford to lose as the cryptocurrency market is extremely volatile. Always research as much as possible before buying any coin.